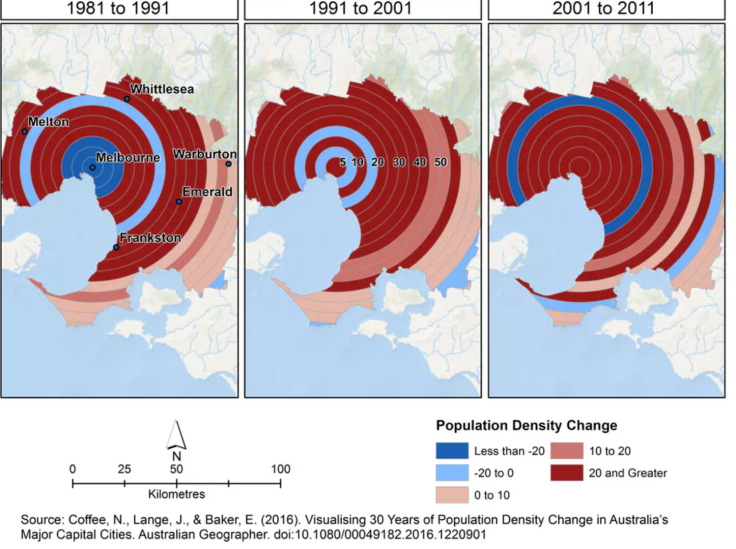 Since settlement, Australian cities have been shaped and reshaped by history, infrastructure, natural landscapes and – importantly – policy.

So, have our cities changed much in the last 30 years? Have consolidation policies had any effect? Have we contained sprawl? Yes, probably and maybe, according to our newly published research.

The great Australian baby boomer dream of home ownership caused our cities to spread out during the second half of the 20th century. Urban fringes expanded with affordable land releases, large residential blocks and cheap private transport.

By the 1980s, across Australia’s cities, the urban fringes were ever-expanding. Inner areas had become sparsely populated “doughnut cities”.

By the end of that decade urban researchers, planners, geographers and economists began to warn of looming environmental, social and housing affordability problems due to unrestrained sprawling growth.

Since this time, large- and small-scale policy interventions have attempted to repopulate the inner- and middle-urban areas. The common policy goal has been to encourage more compact, less sprawling cities. Subdivision, dual occupancy, infill development, smaller block sizes, inner-city apartments and the repurposing of non-residential buildings have all been used.

In a newly published paper, we map the changing shape of Australia’s five largest mainland cities from 1981 to 2011.

Across each of these cities, which together are home to 60% of Australians, there has been substantial suburbanisation and re-urbanisation. In the last 20 years this has resulted in a repopulation of inner cities.

In Melbourne’s case, the return to the inner city has been particularly pronounced in the last decade. Here, the population jumped from around 3,000 to 4,000 people per km². The extent of this change is visualised in the chart below.

Melbourne may well be the exemplar for inner-city rebirth. More than any other Australian city it demonstrates the 30-year turnaround from inner-city decline to densification.

Between 1981 and 1991 Melbourne became a classic “doughnut city”: population declining in inner areas, density increasing in the middle-ring suburbs, and growth steady in the outer suburbs. For example, in the inner 5km ring there was a decrease during this time of almost 200 people per km².

From 1991 to 2001, even though growth was still focused on the middle and outer areas, the inner area began to be repopulated. Overall, between 1981 and 2011 there were approximately 1,500 more people per square kilometre living in the inner 5km ring.

Over the last decade, greenfield development, infill and urban regeneration have increased urban density throughout Melbourne – as shown in the five-yearly map animation below.

Changes in Melbourne population density (persons/km² over the 30 years to 2011 (red is increasing, blue is decreasing).Author provided

While the turnarounds in Sydney, Brisbane, Adelaide and Perth have been less marked than in Melbourne, they are all no longer “doughnut cities”. This means that where people live in these cities has changed.

Australia’s cities are now more densely populated – and we are much more likely to live in inner areas than we were 30 years ago.

We can probably attribute the changes in where urban Australians live to government consolidation policies.

The policy focus throughout the late 1980s and early 1990s was based on incentives to repopulate inner and middle areas.

Policies were changed from 2000 to increase population density across whole metropolitan areas. State and territory strategic plans aimed to promote urban consolidation, with a focus on the inner city.

State and territory plans now focus much more on specific zones throughout the whole of the city, including former industrial areas and surplus government land. New housing development occurs within these defined zones, particularly around transport and areas with urban-renewal potential.

The map visualisations reinforce the scale of this absolute growth across each of the five major Australian cities over the last 30 years.

Have we contained sprawl?

Our research would suggest urban-consolidation policies have slowed but not prevented sprawl, especially in the faster-growing cities like Melbourne, Brisbane, Perth and Sydney.

So, have we reached the point at which our cities are full? How can we accommodate future population growth? And do we need to focus our attention on new urban areas?

Containing and, more importantly, controlling sprawl may present the next big challenge.